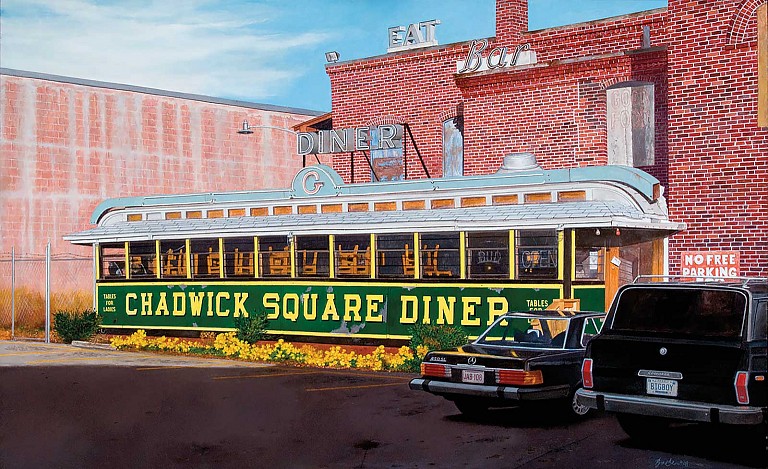 Unlike other masters of photorealism for whom technique and surface are often paramount, John Baeder revels in his subjects—diners, mostly, and in his photographic still lifes, objects with deep personal meaning. M.B. Abram, who represents Baeder and is collaborating with ACA Galleries in an ongoing retrospective of the artist’s work,  writes, “Many of Baeder’s photorealist peers were preoccupied with shiny surfaces, reflections in store windows, forced perspective, and showy composition. Of the hyperrealists of the early ‘70’s, only Baeder embraced imagery that could be appreciated by everyday people and simultaneously, could be interpreted in terms of human values and archetypal relationships.”

Driving to and from his college campus, Baeder “unconsciously saw” the diners, gas stations and motels along the way and began to collect postcards of them from the 20s and 40s. “I saw them as little paintings,” he recalls. When he began to paint diner images himself, he often produced pieces up to 4 feet wide. He brought the diners to life even as they were abandoned by younger generations who didn’t want to run the family business.

Jay Williams, in his book John Baeder’s Road Well Taken, comments that Baeder “was able to subtly convey that each diner or mom-and-pop eatery was at the heart, or was the hearth, of its community—a skill far more important than simply recording the transitory details of roadside subjects.”

In 2018, Baeder, now in his mid-80s, was diagnosed with macular degeneration that blurs the central vision. He turned from his highly realized photorealist paintings to simpler images that are inspired by his postcard images. He also changed from painting with oils to acrylics. However, the straight lines became difficult to portray accurately. Driven to paint, he is now painting abstract landscapes “out of my head,” he explains. “I’m finding my own voice and going through a psychological transformation. In college I did abstract paintings. I’d push the paint around and let it sit.

“When I was painting realistically I would feel the energy in an area of the painting and go to work on that area. It’s inexplicable.”

Prominent in his output are still life photographs, born out of his love for 16th- to 18th-century Dutch still lifes painted with north light. Were it not for the models of classic cars and other contemporary objects, his photographs would be right at home in an exhibition of Golden Age still lifes—although his use of faux fruit and faux flowers might give him away.

Baeder plays with reality and illusion. His expertly rendered paintings resemble photographs and his still life photographs resemble paintings. He says, “I’ve always been fascinated with faux objects. Fruit, flowers, vegetables. And food items, too. The real look fake, the fake look real. The eye is fooled, just the way the illusionists work…Painting faux elements does not work, their subtle nuances only show well in a photograph where the magic resides.”

His still life photographs are deeply personal yet not nostalgic. The objects and compositions stand for themselves as he arranges them in the steady north light.

In Mum’s Vase with My 1941 Cadillac Fleetwood everything connects visually as well as narratively. The vase was, indeed, his mum’s and carries her initials. Although his 1941 Cadillac was black, the two-toned model fits the green color scheme. The Fleetwood can, echoing the model name of his top of the line Cadillac, features a DC 3, the first plane he ever flew on. Nestled below the faux grapes is a model of a DC 3.

The elegant still life, Homage to Aunt Emmy and Uncle Zolty, pays tribute to his father’s family and their perfume and cosmetics company in Hungary. In addition to the bottles of cologne there is Zoltan’s cosmetics recipe book that his wife smuggled out the country, sewn into her coat along with some money and diamond rings. “Emmy was a survivor,” Baeder explains. “Zoltan was murdered in Budapest. Emmy had great style and later lived a fashionable life in Montreal. I included the 1934 Packard, the most stylish car on the mid-30s, to honor her style.”

ACA Galleries in New York, in partnership with MB Abram Galleries, is hosting the exhibition John Baeder: Looking Back (1972-2018) through February 18.