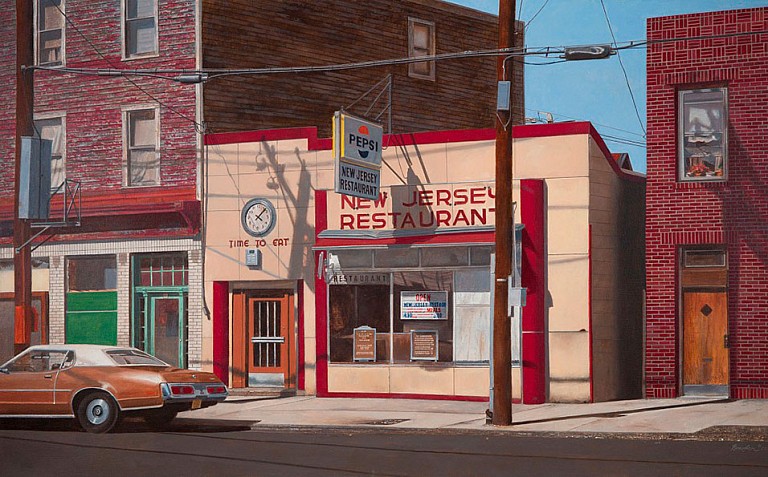 NEW YORK, NY.- ACA Galleries and MB Abram are currently showing John Baeder’s first exhibition at the gallery through February 18th, 2023. The event began on November 4th, 2022. Comprising five decades of work from 1972 – 2018 the show includes the last remaining paintings from the artist’s personal collection alongside his final series of Matchbook Cover paintings as well as his luminous still life photographs.

A consummate collector of Americana, Folk Art, classic cars, vintage post cards and match book covers, to name a few, these artifacts serve as potent source material for the artist. His early paintings depict the optimism of Post-War America – classic diners with streamlined designs and shiny aluminum surfaces – Big Boy and other icons of roadside popular culture - motels and campgrounds dependent on a new economy which allowed for automobiles and more leisure activity; the paintings embody a sense of hope, prosperity and ambition. As years pass the paintings document the decline and deterioration of these places signaling a shift away from the idealism so prevalent in the earlier works.

In 2018 Baeder was diagnosed with macular degeneration, an eye condition which continually weakens the vision. The disease forced him to turn from his signature Super Realist style to a looser more gestural technique as in the Matchbook Covers and his recent landscapes which verge on total abstraction.

Born in 1938, Baeder moved to New York in 1964 as Art Director for Marschalk Co. Although extremely successful in advertising, his first love was painting which he pursued after hours. In 1972 Ivan Karp, founder of the legendary gallery OK Harris paid him a visit and upon seeing the work immediately offered the artist a solo show. Baeder promptly quit his job and never looked back. He exhibited with OK Harris to much acclaim until the gallery closed in 2014.

Baeder’s work can be found in numerous museum collections including the Cooper- Hewitt Museum; Smithsonian Institution, NY; Denver Art Museum, CO; Whitney Museum of American Art, NY; Yale University Art Gallery, New Haven, CT; among many others. In 2007 the Morris Museum in Augusta, Georgia organized the retrospective exhibition and accompanying book Pleasant Journeys and Good Eats Along the Way: The Paintings of John Baeder. Other books about the artist’s work include John Baeder’s Road Well Taken, Jay Williams (2015) and Diners, by Vincent Scully (1977).

Since 1932 the American Contemporary Art Gallery (ACA) has been at the vanguard of American Art. As one of the oldest galleries in New York, its pioneering interest in progressive art was established early on in exhibitions, often introducing the work of artists Giorgio Cavallon, Aaron Douglas, Philip Evergood, Rockwell Kent, Alice Neel, Barnett Newman, Irene Rice Pereira, David Smith, Theodoros Stamos and Charles White, among many others. Today, ACA Galleries continues to break new ground, supporting new artists, representing established artists and distinguished estates; and presenting several exhibitions per year that honor the gallery’s deep historical roots by re-imagining them in a contemporary context.