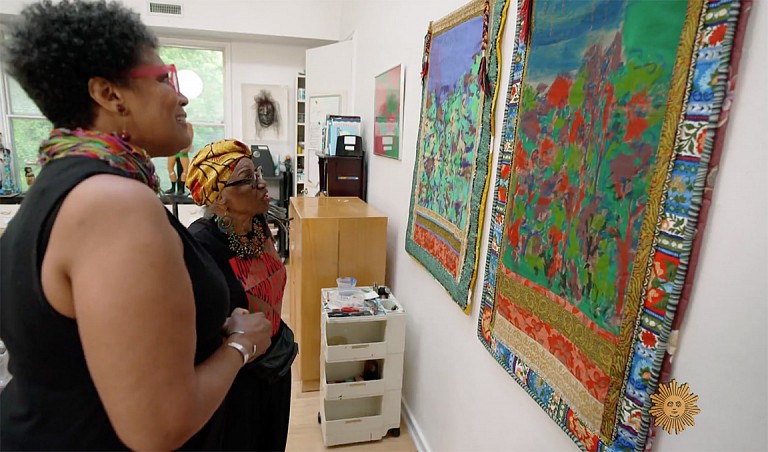 Lush, colorful and daring, each piece, each artistic phase tells a story – the signature style of artist Faith Ringgold. She is best known for her story quilts – a patchwork of images with a story written right onto the fabric.

One, "Tar Beach" (1988), was adapted into a now-beloved, award-winning children's book.

But in fact, Ringgold's work spans over 70 years, an observation of decades of social upheaval in America.

Correspondent Nancy Giles asked, "When people said one thing, you would say, 'But I'm gonna do it anyway'?"

"Yes," Ringgold replied. "That's necessary if you want to do something. You cannot just go by what other people want."

"I constantly looked for the galleries that accepted Black artists," she said. "If I asked, and they said, 'No,' it didn't bother me, because I expected to hear, 'No.'"

Born in Harlem in 1930, Ringgold credits her determination to her parents. Due to debilitating asthma, she was educated mostly at home, which, she says, gave her the freedom to be herself.

So, when the art world rejected her or tried to pigeonhole her work, she fought back.

Giles asked, "What was their difficulty with you and your work?"

"First of all, I painted White people," Ringgold replied.

By then, she was teaching at a New York City high school by day and painting by night.

"So, you were one of the Black teachers there, but you weren't allowed at that table?" asked Giles.

"I noticed that I wasn't invited. Did I want to sit with them? Of course! I wanted to be included. But you supposed to stay with the Black people, and don't paint White people. Because White people were considered superior. And if you painted them in such a way that they were characterized in one way or the other, then you were criticized, because you were causing trouble.

Emily Rales, director and chief curator of the Glenstone Museum in Potomac, Maryland (where a large body of Ringgold's work is currently on display), said, "If she wanted to do something, she was not going to let anything stand in her way. Whether that was experimenting with different kinds of media or techniques, she was gonna do it, no matter what.

"Each decade brought a new innovation. One of the things that I feel really defines her practice is this fearlessness to take on anything," Rales said.

In 1968, when New York's Whitney Museum put on a retrospective of American art from the 1930s onward that didn't include a single Black artist, Ringgold protested, along with dozens of fellow Black artists.

In 1970 Ringgold helped organize a show in downtown Manhattan. "There were flag desecration laws in place," Rales said. "And there were certain people who were being arrested for doing that kind of work. And she thought that was wrong, and she was gonna do something about it, you know?

"And so, she organized a show where a bunch of artists all used the flag as their imagery. And she got arrested."

That same year, Ringgold became involved with the women's movement fighting for women's art to be seen.

"And they were there."

And finally, the doors have started to open, thanks in part to her own perseverance.

Ringgold said, "I have kind of forgotten the sharp feeling I used to get of being rejected, and maybe it has to do with being left out so many times: 'All right, go ahead, leave me out if you want. I'll come in another door!'"

"As you get older, you become more free," Ringgold replied. "If you will take advantage of the freedom that you have attained, anyone can fly. All you gotta do is try."