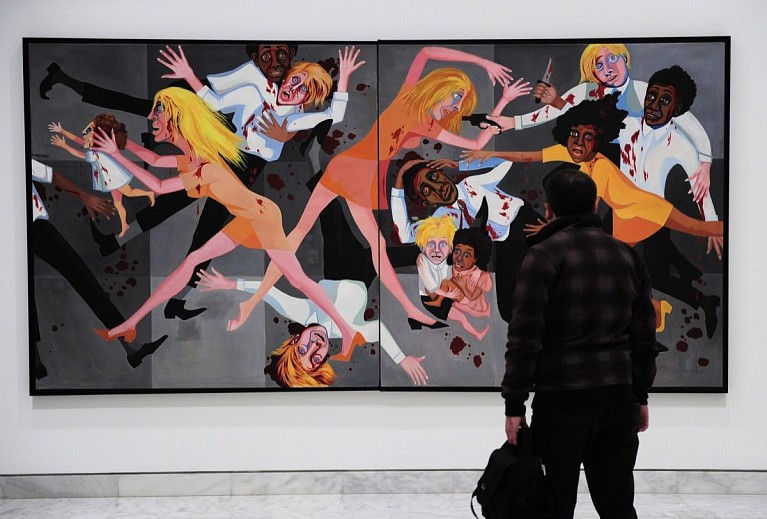 The first time I saw Pablo Picasso’s Guernica (1937), I nearly missed it. I was 15 years old, studying abroad in Spain for the month of July with a few dozen other American high schoolers. It was our last free afternoon in Madrid and while my peers were likely sneaking sangrias at an out-of-the-way café, I, ever the shy, straight-laced type, had museum plans. Forget a few blissful hours of aimless frolicking or rule-breaking, I needed to see the Reina Sofía.

As best as I can remember, 15 years later, it was an uneventful, slightly boring museum trip for my younger self. The Reina Sofía is located in a former hospital, with an idyllic central courtyard that hosts a looming Calder stabile; the white cube galleries hold masterworks of modern art. Its crown jewel, Guernica (1937), is one of Picasso’s most famous paintings and one of the most iconic depictions of the horrors of war. I knew none of this, and apparently wasn’t wise enough to consult the museum’s floor plan or even a basic brochure. I traversed gallery after gallery, and then planned to leave. But before I made it out the door, I saw a postcard of Guernica in the gift shop. I recognized the image from middle school Spanish class and decided I should probably go back and find it. When I finally saw the hulking canvas—goodness knows how I missed a 25.5-foot-long painting—I soaked it in for a minute or two, then made a quick exit, fearing I would miss that evening’s curfew (I didn’t).

The following day, my group headed to Barcelona; and two weeks later I returned to the U.S., my mind swimming with Velázquez’s Las Meninas, Gaudí’s trippy architecture, and ham croquetas.

In the years that followed I became convinced that trip had instilled in me a lifelong love of Spain. I was eager to get back there, and I did, several times during college; and yes, I majored in Spanish. But while my passion for Spanish culture faded over the years, I still can’t seem to shake Guernica. It guided my studies in college, set me on a career path, and often resurfaces, reminding me of art’s potential. Guernica became synonymous with the brutality of war; its indelible imagery has been appropriated by countless artists; and its political heft is so cutting that, for a time, Spanish officials deemed it should be shown behind bulletproof glass.

I began to learn all of this in college during my freshman seminar on the Spanish Civil War. We didn’t go deep on the painting itself but rather a photograph of it: Alberto Schommer’s Guernica Movido (1994). The blurred image of a crowd surrounding the painting was featured in a 2005 exhibition that memorialized 11-M—the 2004 train bombings at Madrid’s Atocha Station, a terrorist attack that killed almost 200 people—on its first anniversary. Schommer’s image captures Guernica’s power, which continues to resonate decades later. Picasso painted it after the Nazi Condor Legion—at the behest of Francisco Franco—bombed the Basque town of Guernica (or Gernika, in Basque) during the Spanish Civil War. An estimated 200 to 250 people died—it happened on a market day, when people were out buying their groceries for the week—and the town was left in ruins. Over 60 years later, the painting was once again serving as a memorial, albeit for a different group of blameless sufferers.

The painting’s distinctive and dynamic composition has been the subject of countless homages and reinterpretations. Guernica was printed on signs used in anti-Vietnam War protests. In the aftermath of 9/11, artist Sophie Matisse recreated Picasso’s composition using her famous great-grandfather’s more colorful palette. Another artist, Nadia Plesner, adapted its imagery to draw attention to the strife in Darfur in 2010.

After I chose to write my senior honors thesis on Guernica, I tried to learn everything I could about its long, twisting history. I set up Google Alerts to find out about new artworks that mined its imagery; I applied for a grant to study in the Reina Sofía’s library; I became a regular at my school’s inter-library loan desk, requesting every book that ever mentioned Guernica.

One summer I even traveled to the town of Guernica, dragging my mom with me during a trip to Bilbao. The town was perfectly charming and unremarkable, save for a humble-yet-moving Peace Museum, and a ceremonial tree. Before the Spanish Civil War, Guernica was best known as a symbol of Basque independence. Beginning in medieval times, the city’s government officials would convene under the branches of a large oak to discuss political matters of the day. That history ultimately may have been what made the small, unsuspecting town a target.

My interests expanded from the painting itself to the journeys it took—from its beginnings in Paris and the world tour it took in support of the Spanish Republic; to its spotlight in the 1939–40 Picasso retrospective at the Museum of Modern Art, where it ultimately remained from 1958 until 1981. I was fascinated that Guernica had spent more time in New York, my hometown, than I had. It became one of MoMA’s star attractions, while Spain was still under the black cloud of dictatorship. It was during this time that the pioneering artist Faith Ringgold visited the painting; she went on to create her own gut-wrenching work, American People Series #20: Die (1967), a bloody, tangled commentary on race relations. That painting earned its due spotlight this past fall, when it was mounted at the new MoMA, alongside another very famous Picasso painting.