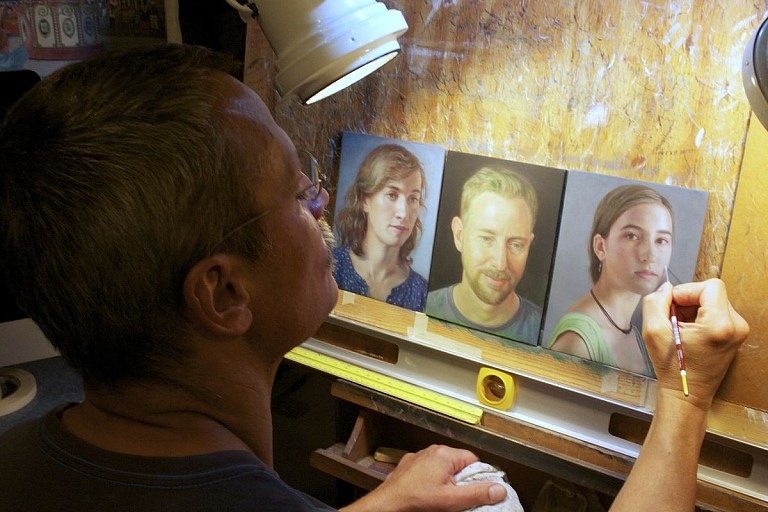 Without realizing it, Doug Safranek got pulled into the very long history of the medium of egg tempera when he decided to become a painter. In 1980, Safranek started in the MFA program at the University of Wisconsin-Madison, which remained, at that time, devoted in part to a curriculum of classical techniques.

“Unbeknownst to me,” Safranek explains, “the University of Wisconsin was still a school that specialized in teaching classical painting techniques—fresco, encaustic, egg tempera—particularly in the 1930s through the ’50s.” The foundation for this preference took shape decades before Safranek enrolled. Artists like Thomas Hart Benton, John Steuart Curry, Reginald Marsh, and John Sloan taught at schools like Madison, Yale, the Kansas City Art Institute, and the Art Students League of New York in the early 20th century. In their work and the way they taught, these artists addressed the peculiarities of everyday life in cities that were changing rapidly. Rather than engaging with the ideas animating the Cubism of Picasso and Braque, the Surrealism of Dalí, and the abstraction of either Malevich or Kandinsky, they preferred to teach students to sketch like John Singer Sargent. They worked and taught their students to work figuratively and in a straightforward, representational manner to show a populace, so they hoped, as it really was. The old techniques seemed to offer these artists a renewed sense of authenticity. These, after all, were techniques with hundreds of years of history behind them. Their widespread use gave viewers a familiarity with them that made them easy to understand for a common public.

The threads of this American Regionalist movement were by no means an isolated phenomenon: similar feelings had surfaced almost a century earlier, in Britain, where the Pre-Raphaelites infamously went picking through the rags of history. Like the Americans of the early 20th century, these British painters sought alternatives to the fashionable painting methods of the time. They arrived, before Raphael, before Hugo van der Goes Portinari Altarpiece (1474-76), before the arrival of oil paints in Italy, at the Florentine Renaissance, where, among other techniques, egg tempera was in widespread use.

Artsy recently spoke with the Brooklyn-based Safranek about the history of egg tempera, and how he came to paint in it.