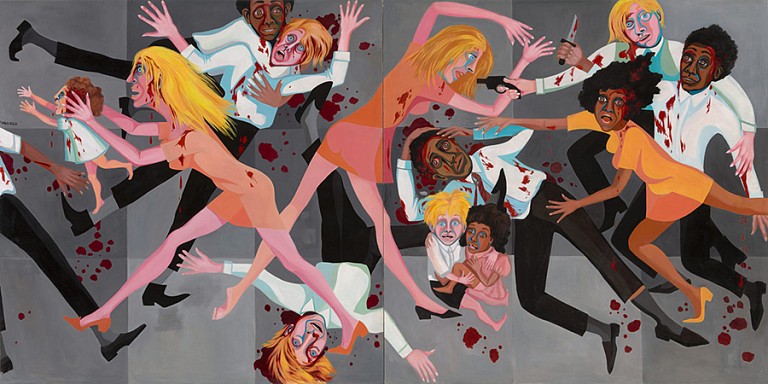 What the New MoMA Misunderstands About Pablo Picasso and Faith Ringgold

Next week, after long anticipation and a four-month hiatus, the Museum of Modern Art in New York will unveil its latest renovation – and expansion. Its new quarters are capacious to be sure, and the museum has put them to good use for an experimental rehang of its permanent collection featuring more women, more artists of colour, more historically-overlooked artists and more artists from outside New York City. In this, the institution that defined the modern museum – and a good deal of modern art – has undertaken to redefine itself and its purpose. Makeovers are tough for a nonagenarian, and the results are mixed, if mostly quite welcome. Despite MoMA’s progressive intentions, however, questions remain about what revamped purpose its expansion announces – especially on the levels of education, curatorial method and economic positionality.

Although the permanent collection galleries proceed largely in chronological order, each is arranged according to a different theme, the variety of which suggests the workings of curatorial authorship in pleasantly idiosyncratic variety. Each is like its own exhibition, linked to the others and yet structured independently. There are monographs of single artists (Henri Matisse, Constantin Brancusi) or works (Claude Monet’s Water Lilies, 1914–26), snapshots of a time or place (‘Circa 1913’, ‘Paris 1920s’, ‘In and Around Harlem’), motif-based galleries (‘Machines, Mannequins, and Monsters’, ‘From Soup Cans to Flying Saucers’), and those exploring technique (‘Stamp, Scavenge, Crush’) or format (‘Readymade in Paris and New York’, ‘The Art of the Multiple’). Three galleries are devoted to art and war.

New wall texts mark a shift in the way the Modern addresses its viewers. In an effort to make the work more accessible to non-specialists, the museum avoids technical terms and the language of ‘-isms’ as much as possible. While the result is sometimes refreshing (arrivederci to the misnomer ‘Arte Povera’), just as often the actual terminology is so thinly veiled that the effort to avoid it comes across as patronizing – ‘Idea Art’ for a gallery devoted to conceptualism, for example. Galleries entitled ‘Action Painting I & II’ simply trade ‘abstract expressionism’ for Harold Rosenberg’s more heroic but equally tendentious moniker. The avoidance behaviour is not entirely uniform, however. ‘De Stijl’ and ‘Fluxus’ are retained, inexplicably, despite their notorious difficulty (to pronounce and to define, respectively). In any case, it now appears that a new visitor to the Modern can tour the permanent collection in some detail without ever learning the words ‘dada’, ‘minimalism’, ‘suprematism’ or ‘futurism’.

There are new additions as thrilling as they are necessary, like the long-overdue ‘Early Film and Photography’ gallery, studded with uncanny images from scientific and medical research. More idiosyncratic supplements bring delightful surprises, like a gallery of artist’s books and prints from the Russian avant-garde artists Olga Rozanova and Natalia Goncharova. Some galleries make unexpected connections, as in the arrangement of four artists who pioneered modularity, rule-based procedure and chance operations within the angular rigors of geometric abstraction. These four – Ellsworth Kelly’s Colors for a Large Wall (1951), Carmen Herrera’s Untitled (1952), Lygia Pape’s Orange (1955) and François Morellet’s Random Distribution of 40,000 Squares Using the Odd and Even Numbers of a Telephone Directory, 50% Blue, 50% Red (1960) – shake up received narratives of the period.

Although thematic criteria can open paths out of curatorial culs-de-sac, less successful are surprises out of time and place that erupt within the more traditionally historiographical galleries. The most notable of these, in a gallery of early cubism, is the pairing of Picasso’s Les Demoiselles d’Avignon (1907) with Faith Ringgold’s American People Series #20: Die (1967). The Ringgold startles for many reasons, one of which is that it is the brashest juxtaposition in the rehang. Other eruptions of this ilk, like Louise Bourgeois’s Quarantania I (1947–53) in the same gallery or Alma Thomas’s Fiery Sunset (1973) in the Matisse room, are less controversial because less memorable. As one-offs, these wildcard additions lack the contextual support to buttress and specify whatever insight might have justified their placement, which risks aesthetic and conceptual injury to both parties. The most disappointing example must be the conscription of Judith Scott’s Untitled (2002) to the Fluxus gallery ‘At the Border of Art and Life’. Scott was an extraordinary artist whose practice – usually found-objects wrapped in colourful yarn – combined elements of craft tradition, fibre arts, post-surrealist objet trouvé and informe sculpture. The curators’ justification for aligning her work with Fluxus – an allegedly shared ‘spirit of transformation and play’ – is brittle. It arouses the suspicion that Scott, who was deaf, nonverbal and had Down syndrome, has been instrumentalized to check diversity boxes without taking her work (or indeed the goal of diversification) very seriously.