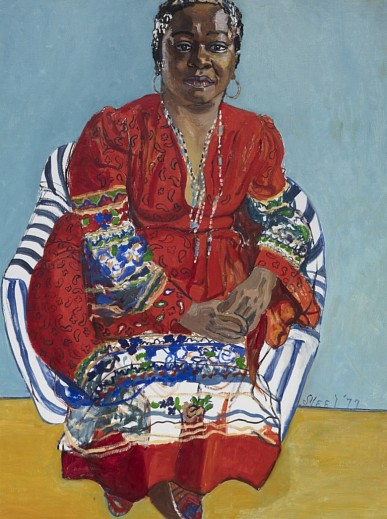 WORKS BY MORE THAN 60 ARTISTS, including Faith Ringgold, are featured in “Soul of a Nation: Art in the Age of Black Power.” Nearly all the artists are black, except Virginia Jaramillo, Andy Warhol (1928-1987), and Alice Neel (1900-1984), who contributed a portrait of Ringgold to the landmark exhibition.

Rinngold has said she posed two or three times for the portrait. Neel painted her wearing a red dress with a patterned skirt and sleeves. She wears beads in her hair and around her neck along with hoop earrings. The 1977 portrait is Jordan Casteel’s favorite artwork.

“The painting that Alice Neel did of Faith Ringgold is one of those paintings that is just stuck in my psyche,” Casteel says in a New York Times video. The critically recognized, up-and-coming artist was first introduced to Neel’s work in the book “Alice Neel: Painted Truths.” She was preparing to apply for the MFA program at Yale University at the time.

In an accompanying T Magazine article by Antwaun Sargent, Casteel says she saw her own work reflected in Neel’s portraits. “I found myself totally in awe that there was somebody who had made work in a way that I was trying to make work myself,” she says. “Her work emulates and speaks and lusts out with a sense of humanity that I really admired, and was drawn to.”

“I found myself totally in awe that there was somebody who had made work in a way that I was trying to make work myself. [Alice Neel’s] work emulates and speaks and lusts out with a sense of humanity that I really admired, and was drawn to.” — Jordan Casteel

BORN AND RAISED IN DENVER, where her first major museum exhibition was recently on view, Casteel was a 2015-16 artist in residence at the Studio Museum in Harlem. She continues to live and work in Harlem where she makes portraits of people in the community, subject she says “might be easily unseen.” Ringgold and Neel are also connected to Harlem.

Ringgold lives and works in Englewood, N.J., but she was born in Harlem and lived there for more than half of her career. The neighborhood inspired “Tar Beach,” the first of many children’s books authored by Ringgold. Casteel grew up reading the book, which is set on a Harlem rooftop.

Neel lived in East Harlem (Spanish Harlem) from 1938 to 1962. Then she moved to West 107th Street, on the Upper West Side, a few blocks south of West Harlem, where she lived the rest of her life. She painted in her apartment, making portraits of her friends, neighbors, political activists, and fellow artists—many of them people of color.

In 2017, Hilton Als assembled Neel’s portraits of African American, Latino, Japanese, Indian, and Arab men and women for the exhibition “Alice Neel Uptown.” Presented at David Zwirner Gallery in New York and Victoria Miro Gallery in London, the exhibition catalog included Ringgold’s portrait. The painting was also featured in “Alice Neel’s Women,” an exhibition at the National Museum of Women in the Arts in Washington, D.C., in 2005.