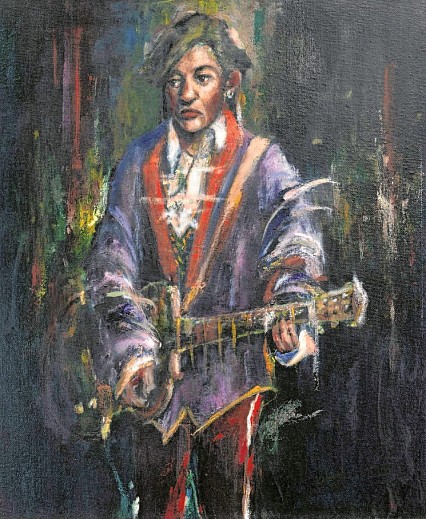 The exhibit, which opens Wednesday and ends Nov. 2 and is sponsored by JCB, will feature many newer works from John, including his mixed media mirrors from the Millican and Vickery collections.

Also featured will be more paintings from John’s mother, Marilyn, who painted at the center at 2001 N. Ewing St. as a part of the Wednesday group, which continues to meet there.

Rounding out this family show will be the work of one of John’s sons, Speck, who graduated from Rhode Island School of Design earlier this year.

“We are thrilled to have this talented family of artists featured here at SICA,” said Sean Hildreth, executive director of the arts center.

“John’s generosity has provided SICA with the opportunity to reach so many people with art in this region,” he said. “To have a show of this caliber at our center is another example of John’s passion for art in the area.”

A special members-only reception will be from 6:30 to 8:30 p.m. Oct. 10. Advance reservations are required.

While John is known for his music, the Seymour native and Rock and Roll Hall of Famer also is an accomplished painter who showed interest at an early age.

Marilyn would be working at her easel while her young children were playing and chasing through the house, she told The Indianapolis Star in a 1993 interview. They would roar by, except one.

“John would stop — at least 30 seconds — and look up at what I was painting,” she said in the article.

John took up painting in 1988, studying portraiture with Jan Royce of Indianapolis and later with David Leffel at the Art Students League in New York City. Marilyn and Speck also studied with Leffel.