John Mellencamp: The Isolation of Mister 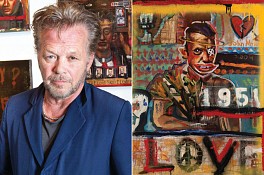 Forget pink houses: John Mellencamp’s first New York gallery show is heavy on the gray, a mix of German expressionist angst with a whiff of the Ashcan School.

“Nobody knows me,” John Mellencamp said recently in his raspy Hoosier drawl. He was slumped in a black leather chair and smoking a cigarette at ACA Galleries in Chelsea, where his first art show in the city opens this week. “I know me,” he clarified. “I’m old enough to know that I don’t need instruction or any of that kind of stuff. I know what I want to do and I do it.” 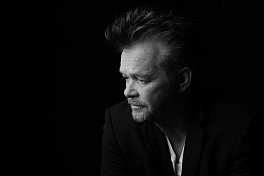 Hailing from Seymour, Indiana (population: 17,503), John Mellencamp is best known as a rock-and-roll icon. Through nostalgic ballads and the rustic twang of his guitar, he’s captured the working class struggles of those who live in America’s heartland. Lesser known is Mellencamp’s long–held interest in being a painter, one that dates back to before his first record deal. That Mellencamp puts brush to canvas may come as a surprise for many, but given the artist’s proclivity to imbue his music with intimate stories and potent imagery (think “Pink Houses,” one of the most famous examples), perhaps it shouldn’t. Often figurative, and evoking hints of Neo- and German Expressionism, Mellencamp’s paintings tread new ground, while remaining thematically in line with the small–town, earnest portraits he crafts in verse. His latest solo outing at ACA Galleries in New York, titled “The Isolation of Mister,” opens to the public on October 22, 2015. We spoke with the artist and musician about his forthcoming exhibition, his beginnings in art and music, and the milestones that led him to stardom.